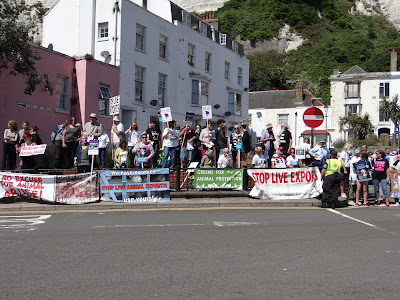 How we treat animals doesn’t just affect their wellbeing, it’s also a marker of our decency as a society. None of us like to see living creatures abused. In Britain we demand high standards of animal protection. The EU gives us the chance to improve the lives of animals right around Europe. Martin Whybrow, Kent County Councillor for Hythe and parliamentary candidate for Folkestone & Hythe says:

'Along with many others, I have protested and spoken out over a long period of time against the abhorrent transport of live animals through Kent's ports. It is inhumane and causes so much unnecessary suffering. We need legislative change to end this once and for all and I am delighted that our Green Party SE MEP, Keith Taylor, is such a staunch campaigner for this at an EU level.'

We need Europe to do more to raise standards in the food industry. Kent Greens have been campaigning hard for an immediate ban on live exports of sheep and calves. Tens of thousands are sent abroad through the port of Dover every year. It’s cruel and unnecessary.

So is the way animals are treated to make products like foie gras, where birds have food forced into them using funnels or even a ‘gun.’ It should be unacceptable in the 21st Century.

Nor should we be slaughtering wild animals, like badgers, when there are better ways of controlling diseases like bovine TB. Killing badgers may be the cheap option, but it doesn’t make it the right one.

Green MEPs are pushing for: